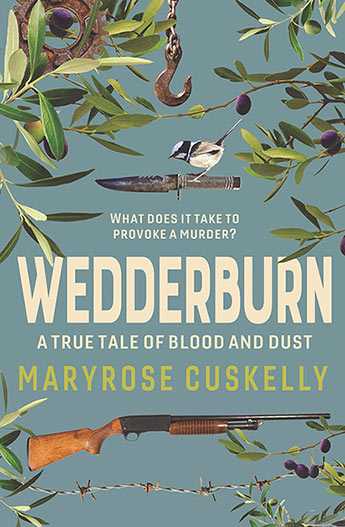 Maryrose Cuskelly has chosen a difficult topic for this book: the murders in late 2014 of Greg Holmes and Greg’s mother and stepfather, Mary and Peter Lockhart. The killer was Ian Jamieson – a farming neighbour and former friend of Peter Lockhart’s. Their farms were south of Wedderburn in central Victoria, and the rural setting played a major part in the events leading up to the murders.

In a recent blog post, Is it possible to defend writing about murder?, Maryrose debated whether she could morally justify writing the story. Similar doubts (or possibly squeamishness) probably underlie my general reluctance to read true crime, but I was glad to make an exception of this book.

Maryrose acknowledges the devastation caused by violence and murder, and their impact on families and communities. But she sees value in bringing to the fore discussions on what lies beneath that violence. She hopes we may gain insights into the causes of violence.

It’s quite a feat to write a compelling story about an event that, while shocking and distressing, is relatively straightforward and by and large not in dispute. In Wedderburn, Maryrose achieves this as she takes us through her discovery of the case, the people involved and the slow processes of the courts. Gradually, and with consideration for all involved, she delves into the emotions and actions that led to Ian Jamieson taking such a drastic step.

Family, friends and acquaintances of Jamieson, and of the Lockharts and Greg Holmes, share their widely varying perceptions of the different parties. Was Peter Lockhart essentially hounding Ian Jamieson? (Even so, should that affect how you think about the murder?) Was Jamieson a lovely guy who ‘snapped’ or a bully?

One of the aspects of the case that surprised me is the age of the people involved; Jamieson was 65 and Peter and Mary Lockhart were in their 70s. Nevertheless, they were drawn into a contest of wills that had a tragic outcome.

Maryrose set herself the task to ‘write with compassion and honesty about those who died and those who continue to suffer as a result’, and she’s achieved that goal. It’s a beautiful book about a dreadful subject.

This review was first published in the Editors Victoria October 2018 newsletter. See also a Q&A with Maryrose Cuskelly in the same issue.

Update: old issues of the newsletter are online on the IPEd (Institute of Professional Editors) archive (members only)

Read my other review posts.

I am a freelance editor, writer and science communicator based in Melbourne, Australia. View more posts